California Governor Jerry Brown is pushing California’s already high cost of gasoline to the highest in the continental United States, just in time for the holiday driving season. Five months after deriding President Trump for pulling the United States our of the Paris Climate Agreement, Governor Brown is waging a personal war on consumers with a gas tax increase. As of November 1st, Californians saw an increase of 12 cents per gallon on gasoline and 20 cents per gallon of diesel, making California the state with the second highest in fuel taxes behind Pennsylvania. The tax hike comes as the state transitions to “winter-blended” gasoline. Winter blends have a higher Reid Vapor Pressure or “RVP” – a measure of how quickly a fuel evaporates at a given temperature. The higher RVP of winter blended gasoline ensures that vehicles can start and run efficiently in colder weather. Generally, winter blended fuels are less expensive, averaging about twelve cents cheaper than summer blends. Governor Brown’s fuel tax hike eliminates the price disparity between winter blends and summer blends, effectively nullifying the price break consumers have enjoyed over the holiday season. 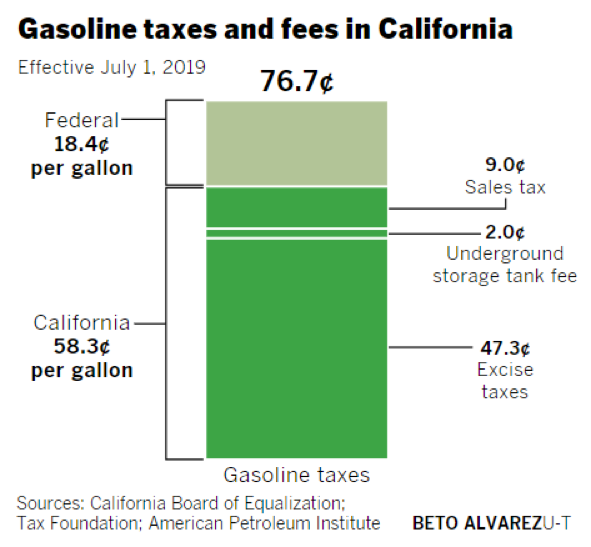 Gov. Brown’s gas tax hike is a big bah-humbug for small businesses in California. In addition to costing California taxpayers $5 billion per year, increased fuel costs put a pinch on job creators. This means business owners will hire fewer new employees, cut benefits, and reduce year end bonuses for workers. Consumers can expect to pay more for the goods and services they currently enjoy. As one southern California flower shop owner explained, “We do about 100 deliveries a week and we go all throughout L.A. County,” he said. “I’m going to have to reduce my delivery area and also let some of my employees go. This is absolutely unbelievable. I know we have more roads and cars on the streets, but all these years the money that was collected for gas taxes, car taxes and all of the other taxes has gone somewhere else.”  The tax increase is designed to coincide with a $52 billion infrastructure plan signed into law earlier this year. Sadly, better roads and bridges are a Christmas present that Californians will probably never see. The state has a history of diverting funds earmarked for “infrastructure” into other projects that have little or no infrastructure relevance. In 2015, California politicians dipped into transportation funds to pay debt service on general obligation bonds, and in 2006, California Democrats diverted $20 billion in transportation bonds into the general fund to free up revenue for other projects.

Fortunately, some policymakers in the state are fighting back. State Assemblyman Travis Allen is leading an initiative to repeal this latest gas tax hike which requires 365,880 signatures to be gathered from registered voters. In an attempt to mislead voters, Governor Brown and Attorney General Xavier Becerra amended the summary ballot language in a misleading way in an attempt to confuse voters about the intent of the initiative.  In response, Assemblyman Allen filed a lawsuit to correct the description. Sacramento Superior Court Judge Timothy M. Frawley tentatively ruled that the state-written title and summary of an initiative to repeal the recent gas-tax increases were misleading and should be rewritten. Currently, Allen’s initiative has garnered less than 25 percent of the necessary signatures while another repeal proposal from Republican attorney Thomas Hiltachk met that threshold Dec. 13, according to the Secretary of State’s office.

Family Businesses for Affordable Energy supports Assemblyman Allen’s efforts and acknowledges that an increase to fuel costs will disproportionately harm small, family owned and operated businesses across the state. Sacramento has come to be known as a black hole for taxpayer dollars, and history will repeat itself with another tax increase. Repealing this the gas tax will be a welcomed Christmas gift in December of 2018.